Puppy in My Pocket: Adventures in Pocketville Wiki
Register
Don't have an account?
Sign In
Advertisement
in: Cats, Character, Females,
and 8 more

Female (official US, UK and other dubs)

Male (original and other dubs)

Balloon is a gray and white tabby crossbreed kitten (it is unknown what the crossbreed is exactly) and a member of the Pocketville Royal Guards.

She is voiced by Haviland Stillwell in English and by Tania De Domenico in Italian.

Balloon has short ears and a bushy tail. Her fur is long and gray with darker gray tabby stripes, a white muzzle, chest, and paws, and golden eyes. She wears a pink Royal Guard collar with fuchsia hearts on it.

Balloon is a cunning and agile cat. She is also clever and uses her intelligence to find Magic Drops quite often. She is the most distrusting of the guards. At first, she was hesitant to trust Kate when she first arrived in Pocketville, but they became good friends. She's the most mysterious and solitary of the group, but she has been known to be very friendly, helpful, and full of life. She loves to go out on her own and have adventures exploring the Pocket Kingdom. 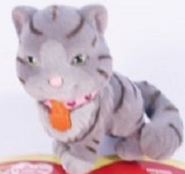 The Giochi Preziosi line of figurines are exclusive to Europe. They have one unique gimmick: a color-changing tag that determines the gender of the character. The figurines also come with a card that shows two descriptions of the character, depending on its gender.

Note: These descriptions are reproduced exactly as they appear on the figurines' backcards, including all errors.

Bobby: He is Balloon's little brother, so cute and very smart!

Balloon: She is one of the Royal Guards of Ami who loves travel to discover the world! 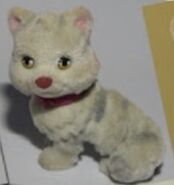 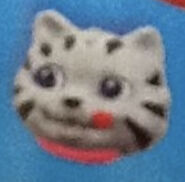 These figurines were not only released in Europe, but in North America as well. They are more simplified in design, and come with Puppy Charms.

Community content is available under CC-BY-SA unless otherwise noted.