Pale, light grayish brown, with a

Danny (Ciro in Italian) is a Neapolitan Mastiff who is one of the Royal Guards. He’s fond of his new friend, Kate, and does his best to help out, despite being the butt of most of his friends’ jokes. He is determined to make Eva pay for her crimes against the kingdom.

He is voiced by Richard Epcar in English and by Alessandro Zurla in Italian.

Danny has lop ears and a wrinkled face, which are the signature traits of a Mastiff. He is tan with a grayish brown muzzle and a white spot on his lower chest. He has light brown eyes, and wears a blue Royal Guard collar with dark blue paw prints on it.

Little is known about Danny's backstory, but it is known that he became a Royal Guard prior to the events of the show, but it was rather informal as he didn't completely finish his training.

He is cheerful, lively, and a little slow in the head, but always ready and willing to protect Princess Ava and the Pocket Kingdom at the drop of a hat. Danny is very talkative and will always have something to say, even if it is brutally honest. He is loyal and caring toward his friends, though he can be stubborn in certain situations.

Occasionally he is disobedient and lazy, and even greedy, but William is always there to bring him to order.

He was also known for being the first one to show up in class. 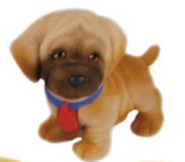 A figure of Danny 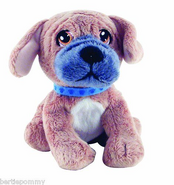 A plush figure of Danny
Add a photo to this gallery
Retrieved from "https://puppyinmypocketadventuresinpocketville.fandom.com/wiki/Danny?oldid=11302"
Community content is available under CC-BY-SA unless otherwise noted.