Eva (Ima in Italian and other languages) is a seal-point Siamese, Princess Ava's evil twin sister, and the main antagonist of the series. She is one of the two cats of the fictional Felis aulicus breed ("Cat of the Royal Court" in Latin), the rarest cat species known to people in the Big City.

Determined to become the next monarch of the Pocket Kingdom, she does everything she can to recover that half and keep Kate, Magic, and the Royal Guards from bringing Ava back. As fate would have it, however, this dark obsession leads to her end as the Petbuster's prisoner.

Eva is beige with dark gray colorpoint markings on her ears, face, legs, and tail, and has blue eyes. She has a beauty mark next to her left eye. In the first episode, she wears a dark purple collar with light gray spikes.

Her defining characteristic is envy, since she was very jealous of Ava and that’s what drove her to do such bad things. However, she was only jealous for Ava’s power. That’s not to say Eva is without authority herself- She shows it very well when she deals with her lackeys.

Eva is intelligent, clever, devious and always devises cunning plans. However, they fail all the time (due to Zull and Gort’s incompetence). She knows a lot about laws in Pocketville, and she knows how the Pocketpedia works. She managed to lure Kate and the Royal Guards by bringing Leo to the Ever Grey Swamp. She even won over the Pet Buster by striking a deal to send him pets in exchange for keeping Ava prisoner. She is able to detect weaknesses in people, like with the snow leopard protecting the Never Alone Flower.

She is also incredibly brave, as she decided to stay in the Ever Grey Swamp, a place other pets fear and would never go to (even Zull and Gort were hesitant). It adds to her cleverness because she knew nobody would come to stop her. She also dared to meet Durillia, someone who a lot of people have feared, and she showed no hesitation or fear.

She is also one full of hatred. She hates everyone, including her lackeys, and she hates her own sister the most due to her extreme jealousy of Ava's title. In the episode "Operation Princess: Part 2", she tells Ava that she has hated her for her entire life, and she had even tried to kill Ava in the past by breaking off a large tree branch with a rope tied to it, but only ended up injuring her leg, which Ava believed was simply an accident. However, what Eva stated was vague, as there is no way that Eva would hate her sister ever since she was born. Many people have speculated that she was lying.

”If those Royal Guards think they’ve seen the last of me, they are very much mistaken. When the time is right, I shall show them who is the rightful princess of the kingdom...”

"Finally, I will be the indisputable queen of the Pocket Kingdom! I will have unlimited power!"

"Ha! My trap has worked! Everyone's busy and no one can stop me! Friendship Heart, here I come!"

Eva with the whole Friendship Heart! 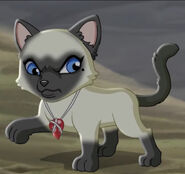 So beautiful, but so evil...

Eva with Zull and Gort.

This hole sure is some trap!

One is not amused.
Add a photo to this gallery 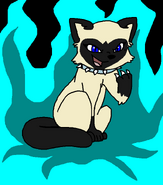 Ava gets the Friendship Heart, but Eva is sad because she wants it, too. 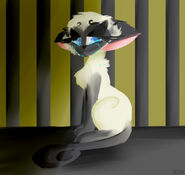 If Eva ever realised how bad and selfish she was... there's no coming back...
Add a photo to this gallery

A figure of Eva
Add a photo to this gallery
Retrieved from "https://puppyinmypocketadventuresinpocketville.fandom.com/wiki/Eva?oldid=8717"
Community content is available under CC-BY-SA unless otherwise noted.