Mela is a Calico cat and one of Princess Ava's Royal Guards. She is one of the main protagonists of Puppy in my Pocket: Adventures in Pocketville.

She is voiced by Katie Leigh and Sandy Fox in English, and by Elisabetta Spinelli in Italian.

Mela has short fur with the colors dark gray and ginger, a white muzzle, underside, and paws, a striped tail, and light green eyes. She wears a pink Royal Guard collar with fuchsia hearts on it.

Little is known about Mela’s backstory, but it is speculated that she finished her training and was appointed a Royal Guard somewhere before the events of Puppy in my Pocket: Adventures in Pocketville.

Like the other three Royal Guards, Mela is shown to be very brave and would not hesitate to face any dangers throughout the Pocket Kingdom.

In each episode, she would not hesitate to face Eva and her gang when they come to snatch the Friendship Heart or do other evil deeds on their way.

Mela is also shown to go through risky obstacles such as climbing trees to claim a Magic Drop. Two of these examples would be when Mela climbed the tallest tree in the Pocket Kingdom in the episode, “[TBA]”, and during the time when she visited Puppy Key and climbed a tree that hanged over a hole dug by Zull and Gort in the episode, “White Paw: Part 2”.

As being a cat and a Royal Guard, it is certainly a given for Mela to be very agile. She is able to climb trees, [TBD]

Mela is able to understand others to the finest detail. This is especially shown when she could tell Kate is pure of heart by noting that the Friendship Heart caused her to teleport to Pocketville in the episode, "The Unexpected Guest", and when she used her "sixth sense" to tell that the Magic Fountain’s water levels were dropping in the episode, "Going Home". 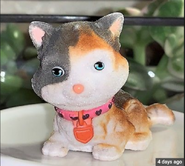 A figure of Mela
Add a photo to this gallery
Retrieved from "https://puppyinmypocketadventuresinpocketville.fandom.com/wiki/Mela?oldid=11251"
Community content is available under CC-BY-SA unless otherwise noted.