Puppy in My Pocket: Adventures in Pocketville Wiki
Register
Don't have an account?
Sign In
Advertisement
in: A to Z, Cats, Character,
and 8 more

Princess Ava (Ami in Italian) is a cinnamon-point Siamese cat (presumably resembling an old-style Siamese) and a member of the Felis aulicus (means "cat of the royal court" in Latin) species. She is the monarch of the Pocket Kingdom who is loved by all pets. Her job is to send pets to lonely children in the Big City or even elsewhere. She has a twin sister named Eva, and is friends with the Royal Guards.

She is voiced by Prudence Alcott (Original) and Julie-Ann Dean (UK and US) in English, and Giulia Franzoso in Italian.

Ava is cream-colored with auburn colorpoint markings on her ears, face, legs, and tail. She also has blue eyes. The Royal Collar that she wears is gold with paw-print, heart, and pocket designs across it, with the Friendship Heart being ruby red (The Ocean of Friendship being cyan).

She also has a yellow star-shaped birthmark on her right paw, which proves that she is a Felis aulicus.

Little is known about Princess Ava’s backstory, but it is speculated that somewhere before the events of the show, she was received the Friendship Heart and was made monarch of the Pocket Kingdom, although she did not take the title as queen for unknown reasons.

Ava is friendly, kind, and caring to all her subjects, whom she considers as her friends rather than servants.

She shows her friendly demeanor well when meeting with any Chosen Pets before their Friendship Ceremonies take place.

Ava is shown to not hesitate when saving someone, even if it means sacrificing herself, as shown when she saves Magic during his Friendship Ceremony, but gets sent to the Big City in his place.

However, when it comes to facing the Pet Buster, her bravery diminishes, possibly due to the fact that the Pet Buster is much larger than her.

When in the Big City, she is shown to be incredibly stubborn and insists she can take care of herself, when in reality she is not capable of doing so. She gets easily irritated when Wallace thinks she needs help.

Ava has a superb sense of morality and wisdom, as seen in some episodes.

In a dream, she tells Kate that patience is vital when it comes to rescuing her.

In the Big City, she does not like it when Wallace steals, even if it is food, but she later got used to it and picked up Wallace’s habits.

Although monarchs and other characters of royalty are stereotypically attributed to laziness, Ava is pretty much the opposite. She has some of her own skills.

Ava’s agility skills are descent, as shown when she made a successful jump from the Magic Fountain’s springboard to the pedestal where Magic stood, and when she and Wallace ran away from hostile stray dogs or the Pet Buster. However, when it came to coming down from a pile of tires, she stumbled from a collapsing pile of tires and injured her leg in the process the first time. The second time right after she and Wallace ran from a pack of dogs, she hopped from tire to tire and landed on her feet as cats do.

Not very much is known about Princess Ava's past.

In Pocketville, Princess Ava would use the Pocketpedia to find perfect matches for lonely people whenever the Friendship Trail reaches the Magic Fountain, and sends the pet over to its owner via the Friendship Ceremony. She keeps her method a long-kept family secret (supposedly), and even the Royal Guards do not have a clue about how she performs the ceremony. She was excited for the day of the Pocket Kingdom’s anniversary but didn’t notice Eva was plotting against her.

On the day of the anniversary, during Oristolfo’s Friendship Ceremony, Eva sent Zull to steal the Friendship Heart, and Ava jumped over to push Oristolfo out of harm’s way, and she gets sent to the Big City in his place.

In the Big City, Ava finds herself lost and hungry, until she succumbs to a sickness and passes out. Wallace, a stray Schnoodle dog, takes care of her until she is better, and she keeps trying to avoid him. Eventually, she warms up to him and Wallace supports and teaches her how to adapt in the Big City. She proves herself to be able to handle challenges outside of her castle. All the while, she thinks about her friends and her home.

Ava later finds out that the Pet Buster, a man who captures stray animals and sells them in auctions, was focusing on her, because there were only two Felis aulicus cats known to humans, and he would become rich if he sold her in an auction.

Fortunately, Kate saves her. Before she left for Pocketville, she offered Wallace a spot in the royal guards, but he refused and they share a kiss. After she returned, Ava explained that Kate's heart is pure and generous, resulting in the Ocean of Friendship's creation and the Magic Fountain's appearance to alter. She announced that Kate is allowed to keep the Friendship Heart and that the Ocean of Friendship will allow her to continue to perform Friendship Ceremonies and fulfill her duties as the princess. Even though Eva causes a lot of trouble, Ava still loves her.

For more quotes, please check out the episodes’ transcripts.

“The waters have crystallized. Let there be joy for today; we shall bring happiness to another child.”

”Oh Friendship Heart, hear my voice. Guide me as always to make the right choice...”

"Somehow when Zull stole the Friendship Heart, it brought me to the Big City. I have to find my way back to Pocketville!"

”It’s simple: the Friendship Heart is yours forever; I no longer need it. The Ocean of Friendship will allow me to fulfill my duties as princess.”

Princess Ava has a lot of toys based off her, from figurines to plushies.

The Giochi Preziosi line of figurines are exclusive to Europe. They have one unique gimmick: a color-changing tag that determines the gender of the character. The figurines also come with a card that shows two descriptions of the character, depending on its gender.

The only exceptions to the color-changing tag include Ava (Ami), Eva (Ima), and Magic.

Note: These descriptions are reproduced exactly as they appear on the figurines’ backcards, including all errors.

She is the beautiful Siamese kitten princess of the Kingdom of Pocketville. She lives in a magical castle perched on a hill. She has the honor of wearing the princely collar with the Heart of Friendship. Thanks to this magical object, Princess Ami can bring thousands of puppies to Earth! 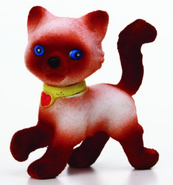 Exclusive to the Princess Suite playset 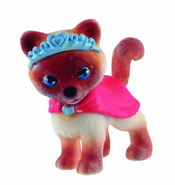 Exclusive to the Pocketville Castle playset

These figurines were not only released in Europe, but in North America as well. They are more simplified in design, and some come with Puppy Charms.

Community content is available under CC-BY-SA unless otherwise noted.